Posted at 09:52h in Pets, VJSCL by Marlon Cassar
Share 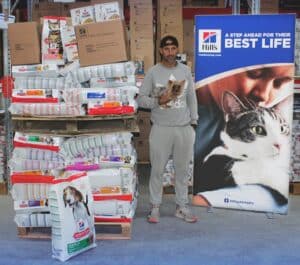 V J Salomone Consumer Lines Ltd, agents for the Hill’s Brand, are very proud to have been the main pet food sponsor for the incredible feat undertaken by Maltese triathlete and animal lover, Fabio Spiteri, to raise funds for various animal shelters.

Fabio is the second person who has managed to cycle around the Sicilian coast in less than 48 hours without stopping.  But for Fabio this was not just a sporting challenge but primarily a quest to raise funds for a purpose that is close to his heart.  His target was to collect €50,000 to be distributed among 16 animal shelters in Malta and 1 in Sicily.  Fabio’s efforts and appeals to the public were fruitful and over €42,000 was collected.

Hill’s Pet Nutrition had originally promised a sponsorship of €2,000 worth of pet food but following the success of the event and the very generous amount donated by the public, the Company decided to increase its donation to €4,700.

Hill’s Pet Nutrition decided to support Fabio with their pet food since the Brand is not only known for its scientifically led nutritious plans but also for its generosity and love towards animal shelters.  In fact, Hill’s provides nutritious food to 100’s of shelters worldwide.  The right nutrition can transform a pet and the Hill’s Food, Shelter and Love Program provides the right nutrition to these abandoned animals, giving them a chance at a better life.  The Brand also has the first of its kind program providing food to animal shelters, veterinary clinics and other NGO’s caring for pets after natural disasters.